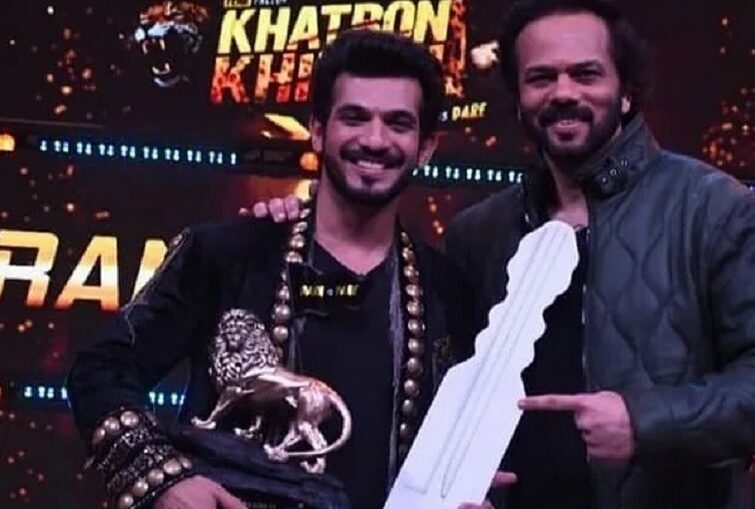 Colors’ popular stunt based reality show Khatron Ke Khiladi 11 has come to an end declaring Arjun Bijlani as its winner.

Arjun Bijlani has bagged the trophy of Khatron Ke Khiladi 11 along with a Car and 20 Lakh Prize money after winning the show.

On Sunday, the show aired its grand finale episode with its Five finalists – Shweta Tiwari, Varun Sood, Vishal Aditya Singh, Arjun Bijlani and Divyanka Tripathi Dahiya. The contestants began their stunts in which Shweta Tiwari got eliminated first and Varun Sood, the next.

Host Rohit Shetty announced that Arjun and Divyanka completed their stunts with a difference of just 30 seconds. Eventually, he announced Arjun as the winner and Divyanka as the runner up.

Winner Arjun, took to Instagram to express his feelings after winning the show. He wrote – ‘Winning losing toh chalte rehta hai what really matters is the journey on the show . I think we all had a great one on #khatronkekhiladi11 . In all honesty I think @vishalsingh713 and @divyankatripathidahiya are also winners. Like I said the journey on this show matters . They have had an equally great one .

I wana thank the stunt team of kkk for taking such good care of all of us .. a big thank you to the reality and creative team who make the show so interesting. Thank you @itsrohitshetty sir for pushing me every time and being such a great mentor . Thank you @colorstv .thank you #capetown .a big big thank you to all of you who supported me throughout my career.you all deserve that trophy..thank you to the almighty for everything. Season 11 hamesha yaad rahega .. Ganpati bappa morya #kkk11‘

Fans are quite impressed with Divyanka’s performance on the show. Calling Divyanka, ‘The Deserving Winner’ they said that, even though she didn’t win the trophy but she has won a Million hearts.

Here’s wishing many congratulations to Arjun and Divyanka.

Which contestant inspired you the most on Khatron Ke Khiladi 11? Do tell us in the comment section below.